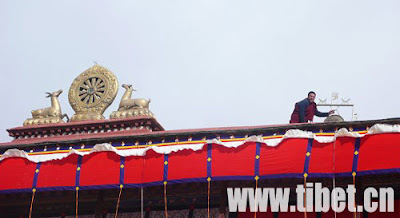 Grand Summons Ceremony
heralds in the Tibet New Year, March 4th, 2009
Dreprung, Monastery, China
China has launched a new website in honour of the 50th Anniversary of the Emancipation of Tibetan serfs and slaves, called Tibet328.cn.

China hopes to educate those who, for whatever reason, do not have the history or educational background to allow them to understand what they hear about Tibet. The Dalai Lama, who left China in the pay of the CIA in 1959, continues to make false and misleading statements about China and Tibet. Under the concept of 3 hands removed, the Dalai Lama often claimes he is not responsible for the trouble and violence that evolves from his disembling.

In a story from Xinhua, another renouned scholar, this one from Spain, deplores the way the western press, ie the Main Stream Media ignors many neutral educated witnesses and allows themselves to be used as a mouthpiece for the Free Tibet movement, which gets funding from the US government and NGOs.

The March 14 riot in Lhasa in 2008, involving violent crimes against people and property, was premeditated and masterminded by followers of the Dalai Lama, Inaki Preciado Idoeta told Xinhua in a recent interview.

"But the Dalai Lama neither made an apology for the riot nor condemned those who perpetrated the violence," said Precidao Idoeta, one of the first Spanish diplomats to China and also a famous sinologist in Spain.}}

When I started this blog, I hoped to let folks know the facts, but have come to realize that the facts, and the welfare of ethnic Tibetans living in China is not what they are really concerned about. It would appear there are sme hard core China Bashers out there, and they will not be happy until China, and 1.3 billion people are again thrown into chaos.

This is not the change that we voted for!

Posted by Kathy Podgers at 12:57 PM No comments:

What is Accurate and Objective News Reporting?

Check this out. This will take careful reading.

But, be forwarned, some of these stories are not only false, but carefully crafted to poison your mind. Can you tell which stories are accurate and objective?

Voice of America
Trusted Source of News & Information since 1942

Report: New Protest by Tibetans Where Monk Set Himself on Fire

A Washington-based advocacy group says several hundred Tibetan monks demonstrated Monday in the same town where a monk set himself on fire in an act of protest on Friday.The International Campaign for Tibet said the Buddhist monks marched after Chinese authorities barred them from observing a traditional prayer festival in the town of Ngaba (Chinese: Aba), in China's Sichuan province.Monks from Sey monastery reportedly demanded that authorities allow them to hold prayer ceremonies, and also release prisoners detained on Friday from a nearby monastery.China's official Xinhua news agency has confirmed that a monk from Kirti monastery lit himself on fire Friday.Activist groups say paramilitary police shot the monk several times.

Witnesses said the monk marched toward the town center after officials prevented monks at his monastery from observing the Great Prayer (Monlam Chenmo) festival. They said he carried a banned Tibetan flag and a picture of the Dalai Lama, Tibet's exiled spiritual and political leader. Xinhua quoted a local Communist party officials as saying the monk, in his late 20s, suffered burns to his neck and head.Kirti monastery was at the center of pro-independence demonstrations last year which began in the Tibetan capital, Lhasa, before spreading across the plateau. Tibetan exile sources said police shot killed at least 23 Tibetans - including Buddhist monks and a 16-year-old school girl - when they fired on demonstrators. Chinese authorities said security personnel fired in self-defense, but did not confirm any fatalities.Chinese authorities have heightened security in Tibetan communities and closed them to foreign tourists in the run up to a sensitive anniversary.

March 10 will mark the 50th anniversary of the launch of a Tibetan uprising against Chinese rule and the flight of the Dalai Lama and his government to India.

Some information for this report was provided by AFP.

BEIJING (AP) — Scores of Tibetan monks in southwestern China marched in protest over the banning of a prayer service, rights advocates said — the latest incident in an apparent increase in acts of defiance against Chinese rule ahead of sensitive anniversaries.

The demonstration began Sunday when monks at the Sey monastery in the ethnically Tibetan county of Aba in Sichuan province gathered to observe a prayer ceremony called Monlam for the Tibetan New Year, which began last week, said International Campaign for Tibet.

China banned Monlam during the Cultural Revolution, when most religious practices were outlawed. The weeklong ceremony, also known as the Great Prayer Festival, was prohibited again in 1990, the year after Beijing launched a crackdown on anti-government protests in Tibet, likely an attempt to prevent mass gatherings.

Tensions have been high in the area since last week, when a Tibetan Buddhist monk from the nearby Kirti monastery was reportedly shot after setting himself on fire to protest the prayer ban and restrictions on religion.

It was not immediately clear who shot him. Chinese authorities on Monday denied that police had been involved in the shooting, the official Xinhua News Agency reported.

But the presence of paramilitary police has noticeably increased in Tibetan communities in recent weeks ahead of the upcoming anniversary of last year's deadly Tibetan riots and the anniversary of the 1959 Tibetan uprising that sent the Dalai Lama into exile.

When Chinese officials stopped Sunday's ceremony, the monks left the prayer hall and marched toward the main town, shouting that they should be allowed to observe Monlam, the Washington D.C.-based International Campaign for Tibet said in an e-mail statement citing unidentified sources.

"They walked for around five to 10 minutes ... before they were apprehended by officials who urged the monks not to proceed further for fear of a violent response from troops stationed in the area," the campaign said.

Armed security officials soon arrived and the monks returned to their monastery, the group said. "They are now surrounded by armed police personnel and are likely to be under lock-down after the protest," it said.

ICT's sources said about 600 monks were involved, while Students for a Free Tibet, another rights group, said 50 monks took part.

Information on politically sensitive topics like Tibet is difficult to obtain from authorities and ordinary citizens, who often fear official retaliation if they talk. The region is sealed off to journalists and foreigners.

China claims Tibet has always been part of its territory, but many Tibetans say the Himalayan region was virtually independent for centuries and that Beijing's tight control is draining them of their culture and identity.

Several Aba residents and hotel clerks who answered calls said they had not seen anything.

Tibet's self-proclaimed government-in-exile in Dharmsala, India, confirmed that the protest occurred but said no details were available.

The move comes as China prepares for the possibility of more unrest in Tibet this year with the approach of the one-year anniversary of the deadly March 14 riots in the capital Lhasa. The unrest — the biggest and most sustained among Tibetans in decades — spread into neighboring Tibetan communities and Chinese troops flooded the region.

The Chinese government says 22 people died in the March 14 Lhasa protests, but Tibetan rights advocates say many more were killed, while monks, nuns and villagers were beaten, fined or jailed.

The Dalai Lama has said celebrations would be "inappropriate" under the circumstances.
March also marks the 50th anniversary of a failed 1959 uprising against Chinese rule that led to the spiritual leader's flight into exile.

Now, here is the same story from China.

CHENGDU, March 3 (Xinhua) -- An official in southwest China's Sichuan Province said Tuesday that a ritual held Sunday by dozens of lamas in the Se Monastery was a case of normal religious activity, and not a "Tibetan monks protest" as reported by some foreign media.

"Having elected a lama to the post of a monastery administrator, known as "tiebang lama", which is literally translated as 'iron-rod lama', Sunday, lamas with the Se Monastery were overjoyed and congratulated the electee on his success," the official recounted.

In accordance with Tibetan Buddhism, "tiebang lama" is in charge of the monastery roster and overseeing discipline enforcement within the monastery.

"This was a normal religious activity but had been distorted as 'Tibetan lamas protest' by some foreign media with ulterior motives, we are indignant toward the distorted news reports based on hearsays and are disappointed at those western media which have long touted they are observing 'objectivity and fairness' in news reporting", said Shi.

Some local residents also said they did not hear or see any lama protest on Sunday.

According to foreign media reports, some Buddhist monks in Aba started protest on Sunday morning when local officials stopped them at the Se (foreign media use Sey) monastery in Sichuan Province as they gathered to pray. The reports cited the International Campaign for Tibet based in Washington D.C. which did not identify any sources.

The reports said that security forces have surrounded the monastery. As many as 2,000 police officers are on guard in this region while telephone communications have been cut, according to rights groups.

There was no such riots as some foreign media have reported, said Wu Zegang, head of the Tibetan-Qiang Autonomous Prefecture of Aba, southwest China's Sichuan Province, who is here to attend the forthcoming annual session of the National People's Congress.

CHENGDU, March 2 (Xinhua) -- Chinese authorities refuted Monday that police had shot a young Tibetan who attempted to set himself on fire Friday in the southwestern Sichuan Province, as was claimed by some "Tibet independence" groups.

The 24-year-old man, identified as Tashi, also known as Tapey, was a Buddhist student at the Kirti Monastery in the Aba County of the Tibetan-Qiang Autonomous Prefecture of Aba.

He attempted to set himself alight using inflammables while holding a portrait of the Dalai Lama and a "snow lion flag" in token of "Tibet independence" on a street in the Aba county seat at about 1:38 p.m. Friday.

When local police saw that, they immediately put out the fire and sent the young man to hospital.

Some "Tibet independence" groups said Tashi was shot by police, but that was totally fabricated, the authorities said.

Tashi is in stable condition now and local authorities are investigating the incident.

VOA was a department within the US Information Agency until Oct 1, 1999. Now we have what is called the Broadcasting Board of Govenors, BBG. an Independent Agency of the US Government.

The US President, now Barack Obama, appoints 8 members to the BBG board, four from each party, and the 9th member is the Sec of State, now H Clinton.

The BBG Mission Statement: To promote and sustain freedom and democracy by broadcasting accurate and objective news and information about the US and the world to audiences overseas.

Now, I ask you, do you think the VOA story above meets the accurate and objective criteria?

Therefore, I ask you, is there a difference between a free press and the people's right to know?
Posted by Kathy Podgers at 12:00 PM No comments: