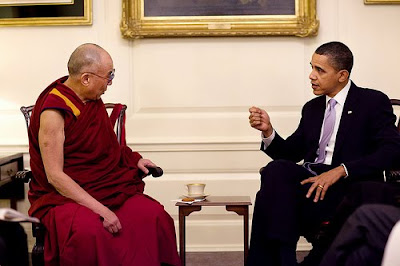 NEWS: President Barack Obama meets with His Holiness the Dalai Lama in the Map Room of the White House. Feb 18, 2010 (Official White House Photo by Peter Sousa)(fair use claim)

“The President met this morning at the White House with His Holiness the XIV Dalai Lama. The President stated his strong support for the preservation of Tibet’s unique religious, cultural and linguistic identity and the protection of human rights for Tibetans in the People’s Republic of China. The President commended the Dalai Lama’s “Middle Way” approach, his commitment to nonviolence and his pursuit of dialogue with the Chinese government. The President stressed that he has consistently encouraged both sides to engage in direct dialogue to resolve differences and was pleased to hear about the recent resumption of talks. The President and the Dalai Lama agreed on the importance of a positive and cooperative relationship between the United States and China.”

President George Bush, who had previously been with the CIA, was the first president to meet with the Dalai Lama. The Dalai Lama wrote a letter to President Clinton expressing his desire for independence for Tibet. Although he promised "Change we can believe in," Presiden Obama continuse the policy of the Bush-Clinton-Bush era. China, and Chinese have expressed their strongest disapproval of this meeting, and the US's continued interferrence in their domestic affairs. China also stated that this meeting has hurt the Chinese, and they would respond acordingly. Within hours of the meeting China summoned the US Ambassador and lodged their complaint.

This is the meeting that enthralled the world during the Olympic Winter Games, and which could not be more controversial. One reason is that the president claimed that he was meeting with the Dalai Lama not because he was a political figure, but "the" spiritual" leader of "the Tibetans." However, that statement belies the official relationship between the Government of the USA and the Dalai Lama. This relationship was put into writing in a formal letted sent by the American Ambassador to India to the Dalai Lama in 1951. (Yes, that is correct, 1951. )

"Your Holiness will understand, of course, that the readiness of the United States to render you the assistance and support outlined above is conditioned upon your departure from Tibet, upon your public disavoual of agreements concluded under duress between the representatives of Tibet and those of the Chinese Communists, and upon your continued willingness to cooperate in opposing communist agression.

An essential part of our cooperation would be a public announcement by the United States that it supports the position of Your Holiness as the head of an autonomous Tibet. The United States would also support your return to Tibet at the earliest practical moment as head of an autonomous [ , ] and non communist country. The position of the United States in this regard is fundamental and will not be affected by developments in Korea or by Chinese Communist...."
(signed by the US Ambassador to India in September 1951)

As you can see, the exerpt above shows that the US has supported the Dalai Lama's activities re China's Tibet since 1951. The offer was put into writing at the insistance of the Dalai Lama's elder brother, who was already a paid CIA asset. The agreement mentiond in the letter is the 17 point agreement, which certainly was not the result of duress, but must have alarmed the US, who had refused to recognise the PRC after Chaing Kai Shek lost the Chinese Civil War and fled to Taiwan. At that time McCarthyism was rampent in the US, and Eisenhower woried about the so called "Falling Dominoes" theory that "the communists wanted to take over the world," and countries would "fall" to communism, one after another, like falling dominoes.

However, the Dalai Lama did not take up the US on it's "offer" until 1959. Why? The Chinese arrived in Lahsa, peacefully, under the provisions of the 17 Point Agreement, yet today some still falsly accust the Chinese of "invading" Tibet! Why? What was really going on, what was really the relationship between the Dalai Lama and the US? 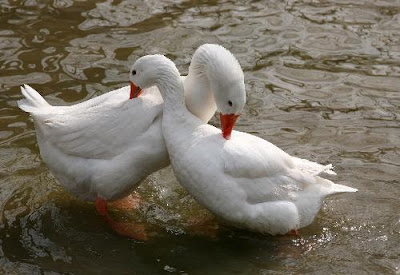 Even the animals get into the mood. This is the season to make preperations for the coming new year, visit family, and enjoy special food and traditions.

Although most folks refer to the Chinese following the "lunar" calandar, in fact, they follow the solar-lunar calandar. This is a 60 year cycle. Originally used by farmers to plan planting, the wonderful calandar, with famous ox pictures, is not unlike the Old Farmer's Almanac.

In two weeks the New year festival will conclude with the Lantern Festival, and young folks, who pine to be with their lovers, instead of family, will be together then.

Posted by Kathy Podgers at 8:01 PM No comments: